The Necessity of Philosophy 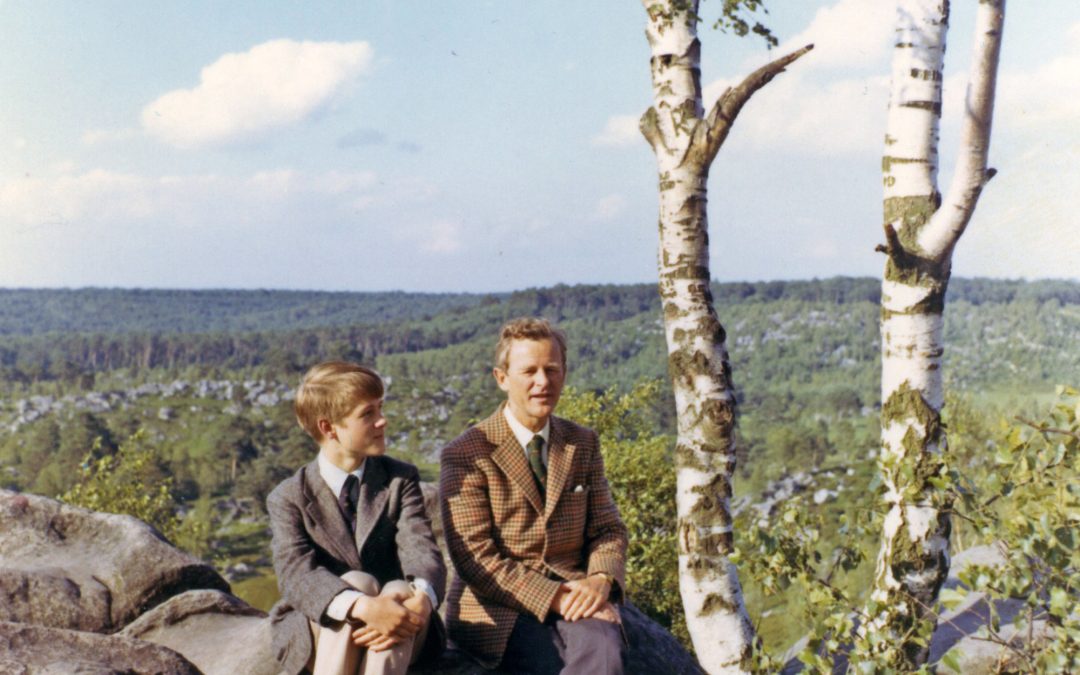 At one point in the development of Creative Uncertainty, my father and I took scissors to the manuscript and laid the scraps, sentence by sentence, on the living room sofa.  Then we assembled it in reverse order.  One version went from the Big Bang at the beginning of the universe to another kind of bang – the risk of nuclear war.  The other version began with that risk and worked its way back to the origin of the universe.  Unfortunately, neither version persuaded early readers that cosmology had anything to do with politics.

In our attempt to be relevant and practical, my father and I missed the essential middle term: philosophy.  We forgot that we were in search not just of correct answers (which our political allies were sure they already knew) but of appropriate questions, ways of approaching not just the immediate circumstances of 1980 but the much larger dilemmas that are still with us, only much more acutely, in the third decade of the new Millennium.

Essential questions are an invitation to philosophy, which is never more important than when we are facing an existential crisis, one that cannot be solved by technical fixes but requires us to ask ourselves how and why we want to live.

Socrates famously claimed that the unexamined life was not worth living.  His essential questions — in the form of dialogues exposing how much less his protagonists knew than they thought they knew, earned him a death sentence at the hands of the Athenian state.  Today, authorities do not bother to put philosophers to death.  The Establishment prefers to dismiss philosophy as ridiculous than to dignify it as dangerous.  If all else fails, it can finally be accepted as true but boring.  Anxious parents steer their children to more remunerative majors, while professors argue that it is a good preparation for law or business school.

But the blame for philosophy’s marginal status lies not only with society’s materialism.  It also lies with philosophy itself.   It is hard to make a better case for philosophy than philosophers themselves make for it.  Academic philosophy is a corpus, a field of study with sub-departments each with specialized terminology that outsiders struggle to understand; but it is also a corpse, something whose own practitioners no longer believe in.  Reputable academic philosophers tell students that studying philosophy will teach them to think more clearly and consistently, but they rarely claim that philosophy is key to saving the world.  Such a claim would be met with a nervous titter as the sign of a well-meaning but naive newcomer.

But such a response is not in fact sophisticated.  Philosophy could help save society, but only once it saves itself from the errors into which it itself has fallen.

The problem goes all the way back to the construction of reason in Western thought.  Philosophy means, literally, the love of wisdom.  Yet wisdom is as foreign to our culture as philosophy is marginal.

What is the wisdom we have lost in knowledge?

What is the knowledge we have lost in information?

In its first, cosmological phase in Ionia, on the west coast of what is now Turkey, the First Philosophers sought a new understanding of nature and human nature, one based upon theory rather than myth.  Rather than explain the world as the work, or play, of somewhat capricious anthropomorphic gods (or, later, in the three Axial religions, of one anthropomorphic god), these philosophers asked what the world is made of – Air, Earth, Water, or Fire.   But really, this was a debate not about a physical substance but about a fundamental natural law.  Do we live in a world of matter (earth) or process (fire)?

The philosopher Simon Critchley in his fascinating lecture “Philosophy’s Tragedy” argues that philosophy made a fatal mistake right at its foundation in excluding story for theory.    He examines the extraordinary wisdom of the Oedipus story – that of a man blinded by his brilliance and arrogance, who commits incest, sees his kingdom suffer, and leads an investigation that points back to him.  Oedipus, Critchley notes, means “I know.”

Theory is essentially static: in our conscious mind, we construct a geometric model of the apparently changing world around us.  The visual mind cannot see time.  By contrast, the world of stories, of dreams, of myth, is inherently temporal – full of change, of surprise, of novelty.  Things just happen, unchallengeable because they are first person experiences in which we have no choice but to be involved.  But intellectual experiences are based on skepticism: staring at a structure, looking in from the outside.  Nothing happens.  Time has been extracted.

But one of these pre-Socratic philosophers tried to escape that trap.  Heraclitus saw change and structure as inseparable.  His most famous maxim is “You can never step in the same river twice,” or, more accurately, “In the same river, ever different waters flow.  Here is an extraordinary insight that prefigures 20th Century biologist Ludwig von Bertalanffy’s Open System: a pattern maintaining itself in a flow of matter and energy, structure that feeds upon process.  Static things are degraded by time; dynamic systems feed upon time for self-maintenance, self-repair, and (with life) for reproduction.

But Heraclitus lost this debate at the outset of Western philosophy.  The winner was Parmenides, who argued that time is an illusion.  How can anything change?  A thing, by definition, must be itself.  If it changes, it becomes different from itself.  Therefore it is no longer its old self.  So nothing really changes.  Quod erat demonstrandum.  Substance metaphysics is not kind to chameleons or caterpillars, or indeed to any living thing.

The separation of the structure from the process is the opening gambit of Western philosophy and leads to almost all its tortured positions over history.  As Alfred North Whitehead writes in Process and Reality, “The vicious separation of the flux from the permanence leads to the concept of an entirely static God, with eminent reality, in relation to an entirely fluent world, with deficient reality.  But if the opposites, static and fluent, have once been so explained as separately to characterize diverse actualities, the interplay between the thing which is static and the things which are fluent involves contradiction at every step in its explanation.  Such philosophies include the notion of illusion as a fundamental principle – the notion of ‘mere appearance.’  This is the final Platonic problem.”

When reality as we experience it is an illusion, then truth belongs to a select few: the philosopher kings of Plato’s Republic.

Democritus tried to reconcile change and stasis, and made an enormously influential move to do so.  He posited atoms – small unchanging building blocks; only their arrangement changed.  In this notion lies the origin of the reductionist method.  Break a complex thing into its unchanging elements; then observe how forces act upon those things to produce apparent change.

The next, enormously influential step occurred at the beginning of the early modern period with Galileo and Newton.  By studying the motion of a ball rolling down an inclined plane, Galileo realized that what we perceive as motion was really just inertia: if you filter out friction, the ball really just continues blindly doing what it was already doing.  Motion is arbitrary, really a form stasis, like a car coasting.  What matters is not change but acceleration.  And this, Newton posited, was the result of force acting on an inert mass.  The world had been entirely mechanized into forces and masses, all known and predictable.  Such a world appeared radically different from the static, ancient and medieval world – yet was fundamentally the same.  It had incorporated motion and thus the ability to change the word.  Yet by reducing motion to inertia, to something passive acted upon by forces that could be expressed in mathematical equations, it gave us the mechanistic, deterministic world picture.  It was a world we could predict and control.  It was also a world in which we were both almighty and abject, the hidden God, the puppet and puppeteer, the inert mass of atoms acted upon by hidden forces, and yet the calculating intelligence that can solve mathematical equations and predict (and manipulate) the action of everything – or everyone – else.  Such powers became truly demonic in the 19th Century, when joined with the motive power of fire.

Until the professionalization of academia in the 19th Century, there was no fixed demarcation between science, economics, theology, and philosophy.  René Descartes was one of the greatest and most influential mathematicians and philosophers.  A Cartesian diagram, with horizontal and vertical coordinates, can plot the values of an equation over time, as in a parabolic curve, which describes the height of a ball you throw into the air as it reaches its apex and again falls.  The result is that you see a temporal process as a spatial, essentially timeless shape: time reduced to space.

Descartes was famous for his dualism between mind and matter – or mind and body.  Insofar as we are bodies, or animals, we are mere machines: our freedom and humanity consists solely in our consciousness and free will, which are immaterial.  The irony is that this dualism leads to intractable dilemmas when you consider both computers and brains.  A computer fits the Cartesian model: the hardware, the silicon chips, are the machine; the software, the computer program, is the mind, which the physical computer executes.  There is no room for freedom in such a dualism.  Both its so-called mind and body are mechanistic.  The more we understand about biological mind, be it in humans or animals, the more we understand that it is embedded in, and inseparable from, our bodies.  Our freedom comes not despite, but because of, our corporeality.  (Continued in the book.) 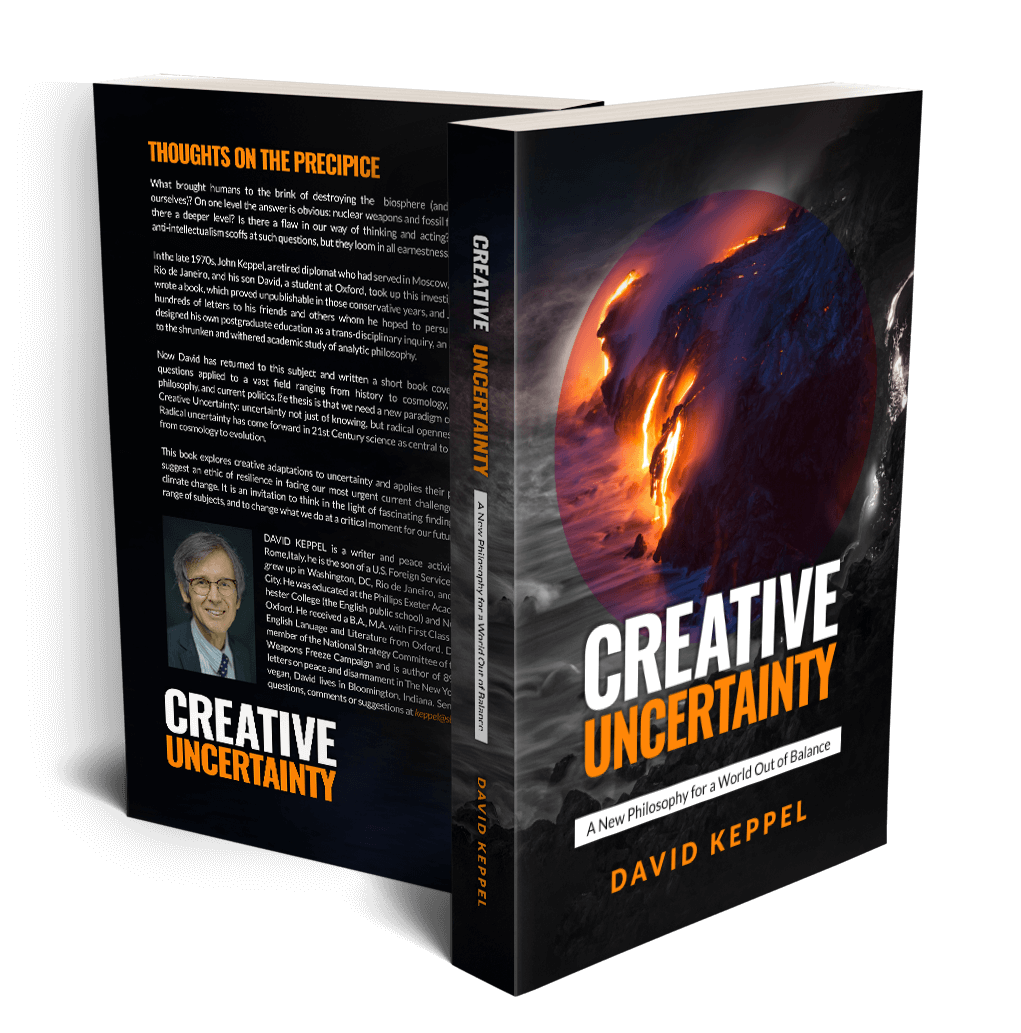